Donny Osmond is an American singer, actor, dancer, television host and former teen idol who first achieved fame performing with four of his elder brothers as the Osmonds, earning several top ten hits and gold albums. Osmond hosted the ‘Donny & Marie’ variety show with his sister. He also hosted the game show Pyramid from 2002 to 2004. Osmond won season 9 of Dancing with the Stars in 2009. He also starred as Joseph in the North American tour of the Andrew Lloyd Webber musical “Joseph and the Amazing Technicolor Dreamcoat” in 1992. Born Donald Clark Osmondon December 9, 1957 in Ogden, Utah, to parents Olive and George Virl Osmond, he was the seventh of eight brothers and has one sister. He has been married to Debbie Osmond since May 8, 1978. They have five children. 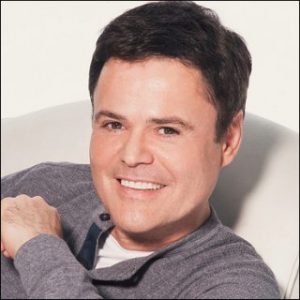 Donny Osmond Facts:
*He was born on December 9, 1957 in Ogden, Utah, USA.
*He has English, as well as Welsh, Danish, Scottish, Northern Irish (Scots-Irish), Swiss-German, and Dutch, ancestry.
*He was part of the group The Osmonds before he went solo later on.
*He recorded the hit song “I’ll Make a Man Out of You” for the 1998 Disney film Mulan.
*He won the ninth season of Dancing with the Stars in 2009.
*Visit his official website: www.donny.com
*Follow him on Twitter, YouTube, Facebook and Instagram.