Dylan McDermott is an American actor. He is best known for his portrayal of Bobby Donnell on the legal drama series The Practice, for which he earned a Golden Globe Award for Best Performance by an Actor in a Television Series – Drama and a nomination for the Primetime Emmy Award for Outstanding Lead Actor in a Drama. McDermott is also notable for his roles in the four seasons of the FX horror anthology series American Horror Story, subtitled Murder House, Asylum, Apocalypse, and 1984. He also starred as Lt. Carter Shaw on the TNT series Dark Blue and starred in two short-lived CBS dramas, Hostages and Stalker. His film credits include The Pang Brother’s The Messengers, Wonderland, Home for the Holidays, Steel Magnolias, Hamburger Hill, Miracle on 34th Street, In the Line of Fire and Burning Palms. Born Mark Anthony McDermott on October 26, 1961 in Waterbury, Connecticut, to parents Diane and Richard McDermott, he has a younger sister, Robin McDermott. McDermott graduated from Holy Cross High School in Waterbury in 1979. He majored in drama at Fordham University and studied at the Neighborhood Playhouse in NYC under Sanford Meisner. From 1995 until 2009, McDermott was married to Shiva Afshar Rose. The couple had two daughters, Colette and Charlotte. From 2015 to 2019, McDermott was engaged to actress Maggie Q. 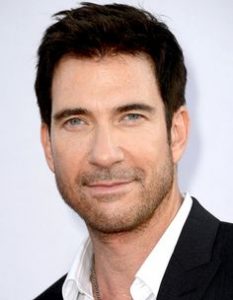 Dylan McDermott Facts:
*He was born on October 26, 1961 in Waterbury, Connecticut, USA.
*He is of Italian, English, Irish, and French descent.
*He played lawyer and law firm head Bobby Donnell on the legal drama series The Practice.
*Empire magazine named him one of the 100 Sexiest Stars in film history (#67). (1995)
*People Magazine named him one of the top 50 Most Beautiful People in the World in 1998.
*He is friends with Edward Asner.
*Follow him on Twitter and Facebook.