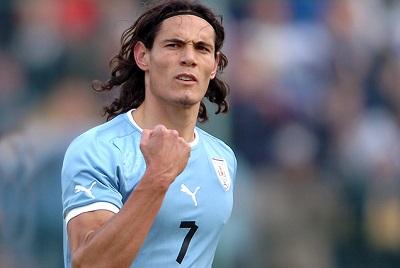 Born Edinson Roberto Cavani Gómez on February 14, 1987 in Salto, Uruguay, to parents Berta and Luis Cavani, his older brother, Walter Guglielmone, also became a professional footballer. He has been in a relationship with Jocelyn Burgardt since 2014. He was previously married to Maria Soledad Cabris Yarrús from 2007 to 2014. He has three children.

Edinson Cavani Facts:
*He was born on February 14, 1987 in Salto, Uruguay.
*He began his career playing for Danubio in Montevideo, and moved to Italian side Palermo in 2007.
*He scored more than 30 goals in each of his first two seasons with Napoli and led them to the Copa Italia in 2011-12.
*He joined Paris Saint-Germain in 2013 after spending three years with Napoli.
*He joined Manchester United in 2020.
*He was romantically linked to María Rosario Ventrone, Micaela Orsi and Sofía Suescun.
*Visit his official website: www.edicavaniofficial.com
*Follow him on Twitter, YouTube, Facebook and Instagram.