Ekaterina Makarova is a Russian professional tennis player who turned professional in October 2004. Makarova started hitting tennis balls at the age of five. She became a multiple-time Grand Slam doubles champion, winning the 2013 French Open and 2014 U.S. She achieved her career-high ranking of number 8 on 6 April 2015. Makarova was born in Moscow, RSFSR, USSR as Ekaterina Valeryevna Makarova. Her mother, Olga Makarova was a housewife and her father, Valeriy Makarov was a banker. She has a brother, Andrey Makarov. 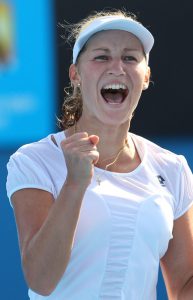 Ekaterina Makarova Facts:
*Her mother was a housewife and her father was a banker.
*She and Elena Vesnina were voted the WTA Fan Favorite Doubles Team of the Year for 2013.
*She won the gold medal in the doubles competition at the 2016 Olympics.
*Follow Ekaterina Makarova on Twitter, Facebook, YouTube, and Instagram.