Singer and songwriter Hayley Williams is the lead vocalist, keyboardist, and song writer for the rock band Paramore whose first two albums, “All We Know Is Falling” (2005) and “Riot!” (2007) went Platinum. Hayley was born Hayley Nichole Williams on December 27, 1988 in Meridian, Mississippi, USA to Christi and Joey Williams. She belongs to Scottish, Irish and German descent. She has two half-sisters, after her parents called their marriage off in the year 2002. Hayley has been married to guitarist Chad Gilbert since February 20, 2016. 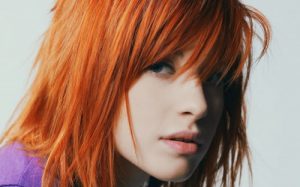 Hayley Williams Education:
She went to West Lauderdale Middle School.
She attended Freedom Middle School, Franklin, but was bullied very badly, even by the teachers, so dropped out after only 4 weeks.
She was then home-schooled & went to a tutor group once a week to pick up homework; this is where she met the Farro brothers.

Hayley Williams Facts:
*Her ancestry includes Scottish, Irish and German.
*She dyes her hair as bright red-orange. Her natural hair color is light brown or blonde.
*She sings and plays piano for the rock band Paramore.
*She recorded her first song at the age of 15.
*Her parents divorced when she was age 7.
*She has a tattoo on the inside of her right ankle saying “Shave Me”.
*She also has a tattoo of a cross on her right thigh.
*She does not smoke, drink, or use other recreational drugs.
*She won Kerrang Readers’ Poll award in the category of “Sexiest Female” in 2009 & 2010.
*Follow Hayley on Twitter, Facebook and Instagram.