Elena Delle Donne is an American professional basketball player who plays for the Washington Mystics of the Women’s National Basketball Association. Elena was drafted 2nd overall by the Chicago Sky in 2013 after a standout career at the University of Delaware. She was the #1 ranked player and a McDonald’s All-American at Ursuline Academy, and also named the CAA Player of the Year and Rookie of the Year during her first season at the University of Delaware. Born Elena Delle Donne on September 5, 1989 in Wilmington, Delaware, USA to Joan and Ernest Delle Donne, she grew up with two older siblings, a brother Gene and a sister, Elizabeth. She married her longtime girlfriend Amanda Clifton in November 2017, at New York’s Hempstead House following a 15-month-long engagement. 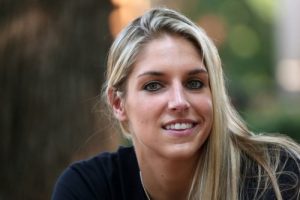 Elena Delle Donne Facts:
*Her father is 6’6″ (1.98 m), and her mother is 6’2″ (1.88 m).
*She is the youngest of three children.
*Her older sister, Elizabeth (Lizzie), is blind, deaf, autistic and has cerebral palsy.
*She was the 2015 WNBA Most Valuable Player (MVP).
*She represented USA at the 2016 Olympic Games in Rio.
*She was the first female player to appear in a WNBA All-Star game in her rookie season.
*She received the WNBA Rookie of the Year award in 2013.
*She is the founder of Elena Delle Donne foundation.
*Visit her official website: www.elenadelledonne.com
*Follow her on Twitter, Facebook and Instagram.