Elizabeth Banks is an American actress, director, producer, and writer. She is best known for starring as Effie Trinket in The Hunger Games film trilogy and as Gail Abernathy-McKadden in the Pitch Perfect film trilogy. She also starred in the films Seabiscuit, Sam Raimi’s Spider-Man trilogy, Wet Hot American Summer, The 40-Year-Old Virgin, Slither, Role Models, The Next Three Days, Man on a Ledge, The Lego Movie, Love & Mercy, Power Rangers, Zack and Miri Make a P*rno, Magic Mike XXL, What to Expect When You’re Expecting, The Lego Movie 2: The Second Part, and Brightburn. Her notable television appearances include: 30 Rock, Wet Hot American Summer: First Day of Camp, Wainy Days, Scrubs and Modern Family. She has also done voice work in The Lego Movie, The Lego Movie 2: The Second Part, American Dad!, American Bikers, and Moonbeam City. Banks made her directorial film debut with Pitch Perfect 2 (2015). In 2019, she began hosting a revival of the 1980s game show Press Your Luck on ABC. Born Elizabeth Maresal Mitchell on February 10, 1974 in Pittsfield, Massachusetts, her mother, Ann Mitchell, worked, until recently, in a bank and her father, Mark Mitchell, was a factory worker for General Electric. She has one younger brother named Geoff. In 1992, Banks graduated from Pittsfield High School and graduated magna cum laude from the University of Pennsylvania in 1996, where she was a member of Delta Delta Delta. In 1998, she graduated from American Conservatory Theater’s Advanced Training Program. She made her film debut with 1998 independent film Surrender Dorothy as Vicki. She is married to sportswriter and producer Max Handelman, with whom she has two sons, Felix and Magnus. 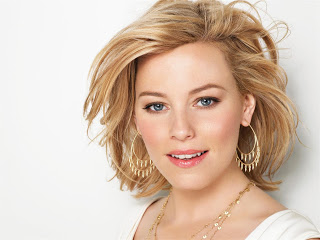 Elizabeth Banks Facts:
*She was born on February 10, 1974 in Pittsfield, Massachusetts, USA.
*Her ancestry includes English, Irish, Scottish, and one sixteenth Dutch.
*She was a member of Delta Delta Delta Sorority at the University of Pennsylvania.
*She decided to pursue a career in acting after breaking her leg in a Little League accident.
*Her favorite holiday movie is Bad Santa (2003).
*She is a fan of David Letterman.
*She is college friends with Todd Lieberman.
*She attended the 2012 Democratic National Convention to support President Obama’s re-election
*She is a supporter of Planned Parenthood.
*She enjoys fantasy football as a hobby.
*In 2003, she married sportswriter and producer, Max Handelman. They have two sons via surrogacy named Felix and Magnus.
*Visit her official website: www.elizabethbanks.com
*Follow her on Twitter, Pinterest, Facebook and Instagram.