Elle Fanning is an American television and movie actress and model. She is best known for her roles in the films The Curious Case of Benjamin Button, Maleficent, We Bought a Zoo, Super 8, The Neon Demon, and Babel. Elle has received Broadcast Film Critics Association Award, Teen Choice Award, Saturn Award, Young Artist Award, Scream Award, and MTV Movie Award nominations. Born Mary Elle Fanning on April 9, 1998, in Conyers, Georgia, she is the daughter of Heather Joy (Arrington) and Steven J. Fanning, and younger sister to actress Dakota Fanning. She belongs to English, French, German, and Irish descent. She attended Campbell Hall School, North Hollywood, Los Angeles. She made her film debut when she was almost three years old alongside Sean Penn in I Am Sam (2001). 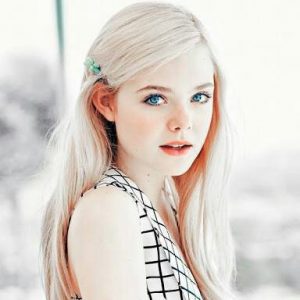 Elle Fanning Facts:
*She was born on April 9, 1998, in Conyers, Georgia.
*Her older sister is actress Dakota Fanning.
*She was a cheerleader for Campbell Hall School.
*She is one of 14 grandchildren.
*She knows how to play the piano.
*Elle enjoys playing soccer.
*Beyoncé is her favorite singer.
*One of her favorite actors is Johnny Depp.
*She has two pets: Goldie (Horse) and Lewellen (Dog).
*Follow her on Instagram.