Emily Deschanel is an American actress, producer and director. She is best known for playing the role of Dr. Temperance “Bones” Brennan in Fox’s crime comedy-drama series Bones from 2005 to 2017. She has also played prominent roles in the films Glory Road, My Sister’s Keeper, Boogeyman, and Spider-Man 2. Born Emily Erin Deschanel on October 11, 1976 in Los Angeles, California, USA to Mary Jo and Caleb Deschanel, she is the older sister of actress Zooey Deschanel. She studied theatre at Boston University’s College of Fine Arts. She has been married to David Hornsby since 2010. They have two sons together. 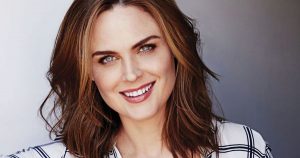 Emily Deschanel Facts:
*Her father is an Oscar-nominated cinematographer and director Caleb Deschanel.
*Her younger sister is actress and singer-songwriter Zooey Deschanel.
*She was raised as Roman Catholic.
*She is a vegan.
*She is a progressive Democrat.
*She had desire of becoming an architect, while growing up.
*She is the supporters of PETA and the Humane Society.
*In 2004, she was named in the list of ‘six actresses to watch’ by Interview Magazine.
*Follow her on Twitter.