John Boyega is a British-Nigerian actor, best known for portraying Finn in the Star Wars film series The Force Awakens, The Last Jedi, and The Rise of Skywalker. He has also appeared in Attack the Block, Half of a Yellow Sun, 24: Live Another Day, The Circle, Imperial Dreams, Detroit and Pacific Rim: Uprising. Boyega won the 2016 BAFTA Rising Star Award, and was awarded the Trophée Chopard at the 2016 Cannes Film Festival. Born John Adedayo Adegboyega on March 17, 1992 in Peckham, London, England, to parents Abigail and Samson Boyega, he has two older sisters named Grace and Blessing. Boyega began acting at Theatre Peckham, a local performing arts centre in London for talented children aged 9 to 14. Boyega first came to prominence after being cast in the 2011 sci-fi comedy film Attack the Block. 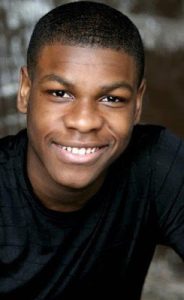 John Boyega Facts:
*He was born on March 17, 1992 in Peckham, London, England, to Nigerian immigrants.
*He won a British Independent Award in 2011 and three Black Reel Awards in 2012.
*He was named was in the Top 100 of the most influential people in the UK of African/African-Caribbean descent in the 2020 Powerlist.
*He has a pet cat named Oluwalogan.
*Follow him on Twitter, Facebook and Instagram.