Eric Bana is an Australian actor and comedian. He is best known for his roles in the films Chopper, Hulk, Troy, Star Trek, Munich, The Time Traveler’s Wife, Deliver Us from Evil, Lone Survivor, and Romulus, My Father. Bana is also known for the television work on series such as Full Frontal, The Eric Bana Show Live, All Saints, Something in the Air, and Dirty John. Born Eric Banadinović on August 9, 1968 in Melbourne, Victoria, Australia, to parents Eleanor and Ivan, he has an older brother named Anthony. Bana was educated at Penleigh and Essendon Grammar School in Melbourne, Victoria. He got married to publicist Rebecca Gleeson in 1997. They have two children: Klaus Banadinovich and Sophia Banadinovich. 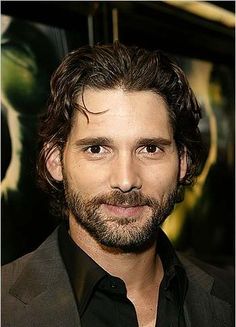 Eric Bana Facts:
*Born on August 9, 1968 in Melbourne, Victoria, Australia, he is of Croatian and German descent.
*His first job was washing cars at a service station, pushing trolleys at Coles New World, barman at Melbourne’s Castle Hotel (1991).
*He began his career as a stand-up comedian.
*He made his motorsport debut in the 1996 Targa Tasmania, driving the same 1974 Ford Falcon XB Coupe.
*He made his film debut in a supporting comic role in The Castle (1997).
*Empire magazine named his one of the 100 Sexiest Movie Stars in the World (#61) (2007).
*He appeared twice on the cover of GQ magazine: July 2003 and March 2008.
*He was a huge fan of Star Trek: The Original Series before playing the villain Nero in the Star Trek reboot.
*He was awarded the AM (Member of the Order of Australia) in the 2019 Queen’s Birthday Honours List for his services to the performing arts and to charitable organisations.
*One of his most admired actors is Rade Serbedzija.
*He is an ambassador for Father Chris Riley’s charity for homeless young people, Youth Off The Streets.
*He hates guns.
*He enjoys racing both bikes and cars in Australia.
*He is a supporter of the St. Kilda Australian rules football team.
*Follow him on Twitter.