Hannah Ferguson is an American model who has appeared in the 2014, 2015, 2016, and 2017 editions of the Sports Illustrated Swimsuit Issue. She has walked for many fashion houses, designers and brands such as Chloé, Max Mara, Alberta Ferretti, Moschino, Dolce & Gabbana and Chanel. She has also been featured in magazines such as GQ, and appeared in advertising for Carl’s Jr. and Triumph International. Ferguson has also appeared in campaigns for Chanel Beauty and Jimmy Choo’s Fever fragrance and was featured on the covers of Vogue Thailand, Elle (Portugal, Brazil), Harper’s Bazaar Ukraine and Numéro Russia. She began appearing on E!’s docu-series Model Squad in 2018. She is represented by IMG Models (Worldwide), VIVA Model Management (Barcelona), and Kim Dawson Agency (Dallas). Born Hannah Emily Rose Ferguson on May 5, 1992 in San Angelo, Texas, to U.S. Marine parents, she grew up on a farm in a small town in West Texas. Following her high school graduation, Ferguson won the Kim Dawson Model Search and moved to Dallas to start her career. In 2015, Ferguson started dating Conn Davis, Jr. 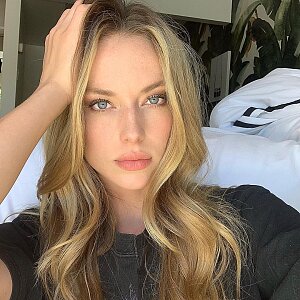 Hannah Ferguson Facts:
*She was born on May 5, 1992 in San Angelo, Texas, as the youngest daughter of U.S. Marine parents.
*Her parents met while serving in the U.S. Marine Corps.
*She appeared in the 2014, 2015, 2016, and 2017 editions of the Sports Illustrated Swimsuit Issue.
*She has been compared to model superstar Kate Upton frequently by various media sources.
*Follow her on Twitter and Instagram.