Erika Jayne is an American singer, songwriter, actress and television personality whose debut single “Roller Coaster” topped the U.S. Billboard Dance Club Songs chart in 2007. Jayne’s other notable hit singles include “Stars”, “Pretty Mess”, “One Hot Pleasure”, “Give You Everything”, “Party People (Ignite the World)”, “Crazy” and “Painkillr”. In 2015, Jayne appeared on the reality television series The Real Housewives of Beverly Hills, and was a contestant on season 24 of Dancing with the Stars in 2017. She also had a recurring role as real estate agent Farrah Dubose on the American television soap opera The Young and the Restless. Jayne made her Broadway debut in Chicago as Roxie Hart on January 6, 2020. Born Erika Nay Chahoy on July 10, 1971 in Atlanta, Georgia, to a single mother, Renee Chahoy, Jayne was later adopted by her mother’s new partner, and they were married and divorced twice. She attended the North Atlanta High School for the Performing Arts. She married Thomas Zizzo in 1991, and the couple had a son named Tommy in 1993 before getting divorced in 1996. On January 1999, she married Thomas Girardi, founding partner of the Los Angeles law firm Girardi & Keese. 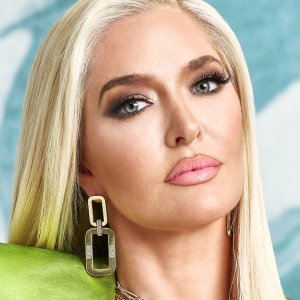 Erika Jayne Facts:
*She was born on July 10, 1971 in Atlanta, Georgia, USA.
*Her mother was only 18 when she gave birth to Girardi.
*She met her biological father for the first time at the age of 25.
*She released her debut studio album, Pretty Mess in August 2009.
*She launched her music label, Pretty Mess Records in November 2010.
*She has attained nine number-one songs on the Dance Club Songs chart as of 2018.
*She published her book, Pretty Mess, in 2018.
*In 2017, she was a contestant on season 24 of Dancing with the Stars.
*Visit her official website: www.erikajayne.com
*Follow her on Twitter, Tumblr, Facebook and Instagram.