Nithiin is an Indian film actor and producer, active primarily in Telugu films. He won Filmfare Award for Best Male Debut – South for Jayam (2002) and Santosham Film Awards as Young best performer for the movies Sri Anjaneyam and Sye (2004). He has also starred in such films as Ishq (2012), Gunde Jaari Gallanthayyinde (2013), and Heart attack (2014). Born on March 30, 1983 in Nizamabad, Telangana, India, he is the son of film producer Sudhakar Reddy and Vindhya Reddy. He has an older sister named Nikitha. He did his schooling from Geetanjali School, Begumpet and did his intermediate M.P.C. stream from Ratna Junior College. He started his career with the movie Jayam in 2002 directed by Teja. In 2020, Nithiin married Shalini Kandukuri. 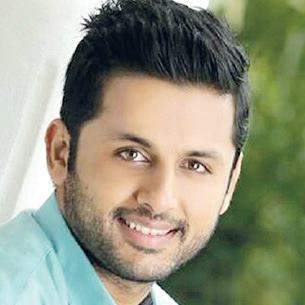 Nithiin Facts:
*He was born on March 30, 1983 in Nizamabad, Telangana, India.
*His parents are Sudhakar Reddy and Laxmi Reddy.
*He made her film debut in Jayam (2002).
*He has been named as Brand Ambassador for Swachh Bharat Campaign along with 9 other personalities for Telangana state by former Indian Union Urban Development Minister M. Venkaiah Naidu in 2015.
*Follow him on Twitter, Facebook and Instagram.