Esther Cañadas is a Spanish model and actress who has walked the catwalk for many designers such as Chloé, Gucci, Dolce & Gabbana, Versace, Chanel, Michael Kors, Calvin Klein, Alexander McQueen, Yves Saint Laurent, Valentino, Moschino, Custo Barcelona and Givenchy. She has appeared in campaigns for many important fashion brands such as Versace, Gianfranco Ferré, Armani, Oscar de la Renta, Jean Paul Gaultier, Carolina Herrera, Fendi, Ralph Lauren, Tommy Hilfiger, and Dior. Cañadas has appeared on the cover or been featured in many international fashion magazines including Vogue, Harpe’s Bazaar, Marie Claire among others. She made her feature film debut with an appearance as “Anna Tyrol Knutzhorn” in the action/romance film The Thomas Crown Affair (1999), starring Pierce Brosnan and Rene Russo. 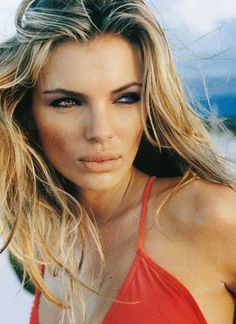 Born on March 1, 1977 in Albacete, Spain, Cañadas originally wanted to pursue a career as a criminologist, but her mother pushed her to pursue a modeling career. She was previously married to Sete Gibernau and Mark Vanderloo.

I wanted to be a criminologist, but my mom was always telling me that I should be a model. -Esther Canadas

Esther Canadas Facts:
*She was born on March 1, 1977 in Albacete, Spain.
*She started modeling at age 14 when she sprang up to 5′ 8″.
*In 1997, Canadas graced the cover of four separate magazines, including Vogue Spain.
*She was once engaged to hotelier Vikram Chatwal.
*Follow her on Twitter and Instagram.