Oliver Hudson is an American actor, best known for his role as Adam Rhodes in the CBS comedy series Rules of Engagement. He is also known for his portrayals of Jeff Fordham on the ABC musical drama series Nashville and as Wes Gardner in the Fox horror comedy Scream Queens. In 2017, Hudson was cast in the lead role of Martin in the ABC sitcom Splitting Up Together, and starred as Doug Pierce in Netflix’s The Christmas Chronicles. 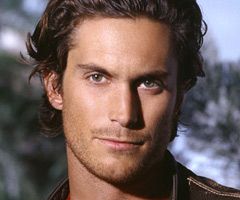 Born Oliver Rutledge Hudson on September 7, 1976 in Los Angeles, California, to actress Goldie Hawn and musician Bill Hudson, his sister is actress Kate Hudson. He also has one half-brother and three half-sisters. He has been married to Erinn Bartlett, who was a Miss Teen USA contestant, since June 9, 2006. They have two sons, Wilder Brooks and Bodhi Hawn, and a daughter, Rio Laura.

Oliver Hudson Facts:
*Born on September 7, 1976 in Los Angeles, California, he was raised by his mother and her partner, Kurt Russell.
*He is the grandson of Rut Hawn and Laura Hawn.
*He played Adam Rhodes in the CBS comedy series Rules of Engagement from 2007 to 2013. Series regular (100 episodes)
*People Magazine named him one of the top 50 Most Beautiful People in the World in 2002.
*Him, his mother and sister are left-handed.
*Follow him on Instagram.