Canadian professional tennis player who reached the final of the 2014 Wimbledon Championships, losing to Petra Kvitová. Bouchard became the first Canadian-born player representing Canada to reach the final of a Grand Slam tournament in singles. She achieved a career-high singles ranking of World No. 5 on October 20, 2014. Born on February 25, 1994 in Montreal, Canada, to parents Julie Leclair and Michel Bouchard, she has a fraternal twin named Beatrice, and two younger siblings, sister Charlotte and brother William. Bouchard started hitting tennis balls at the age of five and was a member of Tennis Canada’s National Training Centre in Montreal. She has dated tennis player Luke Bambridge and hockey player Jordan Caron. 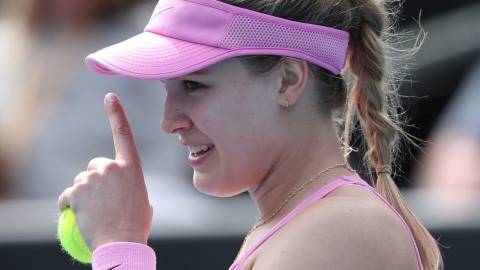 Eugenie Bouchard Facts:
*She was born on February 25, 1994 in Montreal, Canada.
*She began playing tennis when she was 5 years old.
*She turned pro in 2009.
*She won the Tevlin Women’s Challenger in 2012.
*She was named WTA Newcomer of the Year at the end of the 2013 WTA Tour.
*She reached the semifinals of the 2014 Australian Open.
*She reached the final of the 2014 Wimbledon Championships.
*She is the first Canadian female tennis player to be ranked in the top 5 in singles.
*Her favourite tennis player is Roger Federer, whom she met in 2012 at the Wimbledon Ball.
*She is fluent in both French and English.
*Visit her official website: www.geniebouchard.com
*Follow her on Twitter, Facebook and Instagram.