Actress who became recognized for her role as Isabella Braña on the CBS daytime soap opera The Young and the Restless. Longoria received further recognition for her portrayal of Gabrielle Solis on the television series Desperate Housewives, for which she received Golden Globe and Screen Actors Guild Award nominations. She has also starred in the films The Sentinel, Over Her Dead Body, For Greater Glory, Frontera, Lowriders, and Overboard. She played Ana Sofia Calderón on the short-lived NBC sitcom Telenovela from 2015 to 2016, and served as an executive producer for the Lifetime television series Devious Maids. She has also appeared in several high-profile advertising campaigns and numerous men’s magazines. The youngest of four daughters, Longoria was born in Corpus Christi, Texas, to Mexican-American (Tejano) parents, Ella Eva and Enrique Longoria, Jr. She was raised Roman Catholic. Longoria earned her Bachelor of Science degree in kinesiology at Texas A&M University-Kingsville, and received her master’s degree in Chicano Studies from California State University, Northridge, in May 2013. She got her first break in show business with a regular role on The Young and the Restless. She has been married to José Bastón since May 21, 2016. They have a son together. She was previously married Tony Parker from 2007 to 2011 and Tyler Christopher from 2002 to 2004. 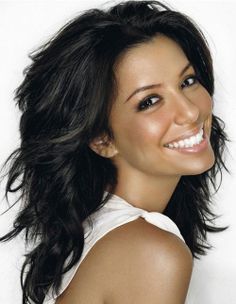 Eva Longoria Facts:
*Born on March 15, 1975 in Corpus Christi, Texas, she is the youngest of four sisters.
*While studying in college, she won the Miss Corpus Christi beauty pageant in 1998.
*She had her breakthrough role in 2004 as Gabrielle Solis on the hit television series ‘Desperate Housewives.’
*She won the ALMA Award for Person of the Year in 2006.
*In 2008, she opened a restaurant called Beso in Hollywood with Todd English.
*She is close friends with Mario Lopez since 1992.
*She is friends with George Lopez, Ana Ortiz, Justina Machado, Bradley Cooper, Wilmer Valderrama, Amaury Nolasco and Serena Williams.
*Follow her on Twitter, Facebook and Instagram.