Eva Mendes is an American actress. She is best known for her roles in the films Training Day, Stuck on You, 2 Fast 2 Furious, Girl in Progress, and Hitch. She has also starred in the films Trust the Man, Ghost Rider, The Place Beyond the Pines, The Spirit, We Own the Night, Bad Lieutenant, Last Night, The Other Guys, Out of Time and The Women. She has featured in numerous music videos for artists like Will Smith, and has also been an ambassador for brands, including Calvin Klein, Pantene shampoo, Cartier, Reebok, Morgan and Peek & Cloppenburg. Born Eva de la Caridad Méndez on March 5, 1974 in Miami, Florida, to Cuban parents Eva Perez Suarez and Juan Carlos Mendez, Mendes grew up in Los Angeles, California. She had an older brother named Juan Carlos Méndez, Jr., who passed away from throat cancer. She also has an older sister named Janet, and a younger paternal half-brother, Carlos Alberto “Carlo” Méndez. She graduated from Herbert Hoover High School in Glendale, California. She has been in a relationship with Ryan Gosling since September 2011. They have two daughters, Esmeralda and Amada Lee. 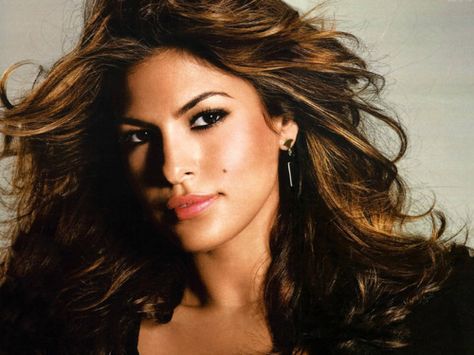 Eva Mendes Facts:
*She was born on March 5, 1974 in Miami, Florida, USA.
*She is of Cuban descent and was raised Roman Catholic.
*She started her acting career after a talent manager saw her photo in a friend’s portfolio.
*She inducted into the Hair Fan’s Hall of Fame in 2012.
*She is fluent in both English and Spanish.
*Her hobbies include music, hiking, biking, skiing, mountain climbing, and interior design.
*She is friends with Will Smith and Cameron Diaz.
*Follow her on Twitter, Facebook and Instagram.