Fei Fei Sun is a Chinese model who became the face of cosmetic giant Estée Lauder in 2017. She has walked runways for Jil Sander, Dries Van Noten, Céline, Hermès, Miu Miu, Prada, Valentino, Christian Dior and many others. She was the first East Asian model on the fold cover of the September issue of American Vogue. She appeared on the cover of Vogue Italia in 2011, 2014, and 2015. She was ranked #12 on a models.com Top 50 list. Sun’s official agencies are Elite Model Management (New York, Paris), Women Management (Milan), Storm Model Management (London), and Donna Models (Tokyo). Born Sun Feifei on March 20, 1989 in Weifang, China, Sun started her modeling career after graduating from high school. She later attended Suzhou University and majored in theater. She is married to Liang Zi (亮子), a photographer. 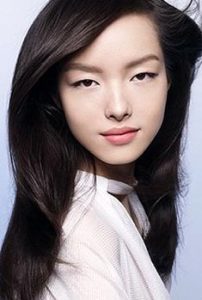 Fei Fei Sun Facts:
*She was born on March 20, 1989 in Weifang, China.
*She studied fashion at Suzhou University.
*She began her modeling career in 2008 when she represented China in Elite Model Look.
*She made her international runway debut during London Fashion Week in February 2010, walking for Christopher Kane.
*She became the first Asian model to front a solo cover for Vogue Italia’s January issue in 2013.
*She is close friends with Xiao Wen Ju, Liu Wen and Vanessa Axente.
*In 2007, she started dating photographer Liang Zi. They tied the knot in December 2017.
*Follow her on Twitter, Facebook and Instagram.