Fred Armisen is an American actor, comedian, writer, producer and musician who was a cast member of Saturday Night Live from 2002 to 2013. He and Carrie Brownstein co-created the IFC sketch comedy series Portlandia. Armisen also co-created and stars in the mockumentary IFC series Documentary Now! alongside Bill Hader, Rhys Thomas, and Seth Meyers, as well as the Showtime comedy series Moonbase 8 alongside Tim Heidecker and John C. Reilly. He is also known for his voice acting work as Elliot Birch in the Netflix original animated show Big Mouth. He has also appeared as a guest-star in several television series such as 30 Rock, Parks and Recreation, Brooklyn Nine-Nine, New Girl, Broad City, Unbreakable Kimmy Schmidt, Difficult People, The Last Man on Earth, and Curb Your Enthusiasm. For his work on Portlandia, Armisen was nominated for an Emmy Award for Outstanding Writing for a Variety Series in 2012, 2013 and 2014 and for Outstanding Supporting Actor in a Comedy Series in 2014. 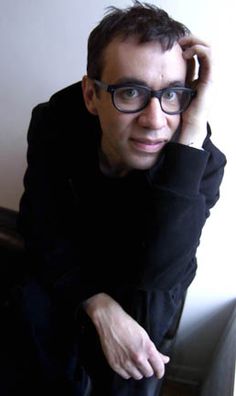 Born Fereydun Robert Armisen on December 4, 1966 in Hattiesburg, Mississippi, to parents Hildegardt and Fereydun Armisen, he was raised in Valley Stream, New York. Armisen attended New York’s School of Visual Arts before dropping out to pursued a career as a rock drummer. He began his comedy career by performing on Late Night with Crank Yankers and Conan O’Brien. He has been in a relationship with actress Natasha Lyonne since August 2014. He was previously married to Elisabeth Moss and Sally Timms.

Fred Armisen Facts:
*Born on December 4, 1966 in Hattiesburg, Mississippi, he is of German and Korean descent on his father’s side, and of Venezuelan descent on his mother’s side.
*He was a drummer for the early ’90s punk band Trenchmouth.
*He was high school friends with fellow Saturday Night Live (SNL) cast member Jim Breuer.
*He is good friends with Sheila E.
*He has a fear of heights.
*Visit his official website: www.fredarmisen.com
*Follow him on Instagram.