Gabbie Hanna is an American YouTuber, viner, singer-songwriter, comedian, and author. One of the most popular social media star Gabbie rose to prominence through her Vine channel The Gabbie Show, which earned over 4.9 million followers. Her YouTube channel, Gabbie Hanna, formerly known as The Gabbie Show, has earned over 5.6 million subscribers. Gabbie released her debut song ‘Out loud’ and her second song ‘Satellite’ through her YouTube Channel, Gabbie Hanna. Out loud reached #3 on the US iTunes charts. In September 2017, she released a book, Adultolescence, a poetic writing piece which features her struggle in life in a funny way. Born Gabrielle Jeanette Hanna on February 7, 1991 in New Castle, Pennsylvania, USA, she belongs to Lebanese, French and Polish descent. She has six siblings. She graduated from the University of Pittsburgh with a degree in psychology and communications. She has worked with many favorite Viners including Jessi Smiles, Brennen Taylor, Landon Moss, Chad Perez and Alx James. 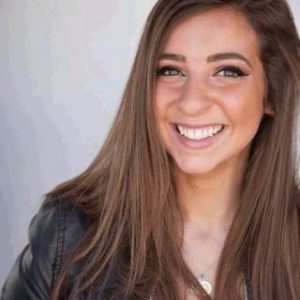 Gabbie Hanna Facts:
*Born in New Castle, Pennsylvania, Gabbie is of Lebanese, French and Polish descent.
*She began her career on the popular streaming service, Vine.
*She used to see a therapist for having murder nightmare.
*She was nominated for an IHeartRadio Social Star Award in April 2018.
*Gabbie has an addiction to scented candles.
*She was a member of Sigma Sigma Sigma Sorority.
*Follow her on Twitter, Youtube, YouNow, Facebook and Instagram.