Gabriella Wilde is an English model and actress, born April 8, 1989, in Basingstoke, Hampshire, England, to the aristocratic Gough-Calthorpe family. She rose to fame as a model and appeared in the films The Three Musketeers, Carrie and Endless Love. Her father, businessman John Austen Anstruther-Gough-Calthorpe, is a former chairman of the Watermark Group, and her mother, Vanessa Mary Teresa (Hubbard), is a former model who sat for David Bailey and John Swannell. She has English, as well as some Scottish and Irish ancestry. Wilde has a younger sister, Octavia, as well as five half-siblings: Isabella, Olivia, Arabella, Georgiana, and Jacobi. She has been married to musician Alan Pownall since September 13, 2014. They have two children. 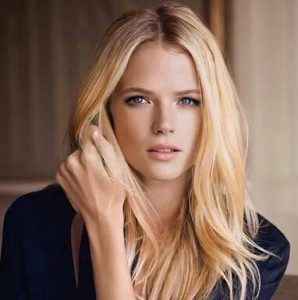 Gabriella Wilde Facts:
*She began her career as a model and had her breakthrough when she joined Premier Model Management at the age of 14, and appeared in campaigns for companies including L.K.Bennett, Lacoste, Abercrombie & Fitch, Burberry and Topshop and posed for InStyle, Cosmopolitan, Vogue and Nylon.
*She is descended from the aristocratic Gough-Calthorpe family.
*She used to smuggle vodka in Heathfield.
*Her first ever Burberry purchase was a deep purple suede and leather handbag.
*She was discovered by ex-model Naomi Campbell in a toilet at the age of 14.
*She was given the title of “Second-Most-Eligible girl in Britain” in 2007.
*She dropped her last name, “Anstruther-Gough-Calthorpe” to “Wilde” when she shifted her career from modeling to acting, just because it was a long name and difficult to pronounce.
*She never watches her own films.
*Follow her on Twitter and Instagram.