Gaganjeet Bhullar is an Indian professional golfer, currently playing on the European Tour. Turning professional in 2006 at age 18, Bhullar started his professional career on the Professional Golf Tour of India where he has yet to miss a cut. He began his career on the Asian Tour in 2007. He was awarded Arjuna Award in 2013. Born Gaganjeet Singh Bhullar on April 27, 1988 in Amritsar, India, to Sikh parents, Bhullar was India’s number one amateur in 2004 and 2006 and was part of the Indian team that won the silver medal at the 2006 Asian Games. 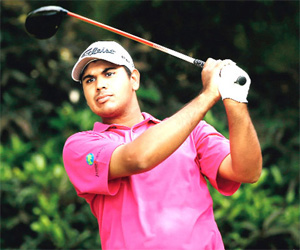 Gaganjeet Bhullar Facts:
*He was born on April 27, 1988 in Amritsar, India.
*He was India’s number one amateur in 2004 and 2006.
*He was part of the Indian team that won the silver medal at the 2006 Asian Games.
*He turned professional in 2006.
*He become the first Indian player to win a tournament on the Challenge Tour, winning the inaugural Gujarat Kensville Challenge in January 2011.
*He won the Yeangder Tournament Players Championship in September 2012.
*He won the Venetian Macau Open in October 2012.
*In August 2013, he received the Arjuna Award.
*Follow him on Twitter, Facebook and Instagram.