George Clooney is an American actor, director, producer and writer. He is the recipient of several accolades, including three Golden Globe Awards for his work as an actor and two Academy Awards, one for acting and the other for producing. He is best known for his roles as Dr. Doug Ross on the medical drama series ER, as Bob Barnes in the 2005 film Syriana, and as the title character in the Ocean’s Eleven trilogy. He won his first Academy Award for Best Supporting Actor for his work in Syriana. His other well-known films include Batman & Robin, Brother Where Art Thou, The Perfect Storm, The Descendants, Michael Clayton, Dusk till Dawn and The Monuments Men. Born George Timothy Clooney on May 6, 1961 in Lexington, Kentucky, to Nick Clooney and Nina Bruce Warren, he belongs to Irish, German, and English descent. He spent most of his growing years in Ohio and Kentucky, and graduated from Augusta High School. 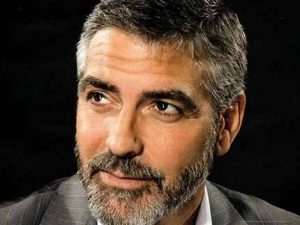 George Clooney Facts:
*He was raised Roman Catholic.
*He spent most of this youth in Ohio and Kentucky
*In 1997, he was voted “Sexiest Man Alive” by People Magazine.
*In 2003, he was ranked #3 of 10 Top Sexiest Men in People magazine.
*He is the 6th actor to play Batman.
*He is big fan of Dallas Mavericks.
*He is afraid of earthquakes.
*He is good friends with actor Ben Weiss, Rande Gerber and Mark Wahlberg.