Maria Sharapova is a Russian former professional tennis player who became number 1 in the world in August 2005 & became the first Russian woman to win Wimbledon. Turning professional in 2001 at age 14, she has won 36 singles titles and five Grand Slam titles—two at the French Open and one each at the Australian Open, US Open, and Wimbledon. She has also won three doubles titles. Born Mariya Yurevna Sharapova on April 19, 1987 in Nyagan, Russia, to Uri and Yelena Sharapova, Sharapova began playing tennis at age 4. She moved to the U.S. at an early age and started training at the Nick Bollettieri Tennis Academy. She first reached the top of the WTA world rankings at age 18. 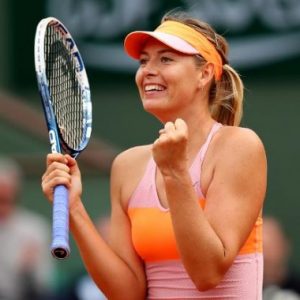 Maria Sharapova Facts:
*She was introduced to tennis at the age of four and turned professional in 2001.
*She made her Olympic debut in 2012 with the London’s Summer Olympics 2012 and won the Silver medal there.
*Became the first Russian to win a career Grand Slam defeating Sara Errani at the 2012 French Open.
*She was the first torch bearer in the lighting ceremony of Winter Olympics in Russia in 2014.
*She was ranked #19 in FHM’s “100 Sexiest Women in the World 2005” special supplement.
*People Magazine named her one of the top 50 Most Beautiful People in the World in 2005.
*She joined IMG models at the age of eight (1995).
*She was suspended for 15 months after testing positive for a banned substance in 2016.
*Visit her official website: www.mariasharapova.com
*Follow her on Twitter, Facebook and Instagram.