Jamie-Lynn Sigler is an American actress and singer born in Jericho, New York. She is best known for her portrayal of Meadow Soprano on the HBO series The Sopranos from 1999 to 2007. She released her first album, Here to Heaven, in 2001, which included the single ‘Cry Baby’. Born on May 15, 1981 in Jericho, New York, to Connie and Steve Sigler, she belongs to Romanian Jewish, Greek Jewish and Cuban descent. She started acting and singing when she was 7 years old. She is a 1999 graduate of Jericho High School. She has been married to Cutter Dykstra since 2016. They have a son together. She was previously married to AJ Discala. 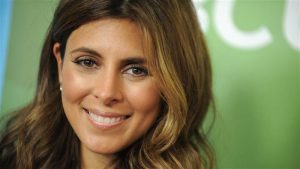 Jamie-Lynn Sigler Facts:
*She began acting and singing at age 7.
*She speaks Greek and Spanish fluently.
*She was ranked #42 in FHM’s “100 Sexiest Women in the World 2005” special supplement.
*She was listed #59 on the Maxim magazine Hot 100 of 2007 list.
*She is good friends with Lance Bass and Jessica Simpson.
*Follow her on Twitter, Google+, Facebook and Instagram.