Georgia May Jagger is an English fashion model and designer who debuted with Resort 2011 fashions show where she walked for Chanel. She has also walked the runway for major fashion houses and designers such as Tommy Hilfiger, Balmain, Vivienne Westwood, Miu Miu, Sonia Rykiel, Thierry Mugler, Marchesa, Versace, Fendi, Tom Ford, rag & bone, Isabel Marant, Louis Vuitton, Marc Jacobs, and Just Cavalli. She became the face of Hudson Jeans from 2009 to 2013. She took part in the closing ceremony of the 2012 London Olympics with Kate Moss, Naomi Campbell and Lily Donaldson, representing British fashion. Born Georgia May Ayeesha Jagger on January 12, 1992 in London, England, she is the daughter of American supermodel Jerry Hall and the Rolling Stones lead singer Mick Jagger. Jagger was educated at Ibstock Place School in Roehampton, southwest London. In 2012, Jagger started dating fellow model Josh McLellan. 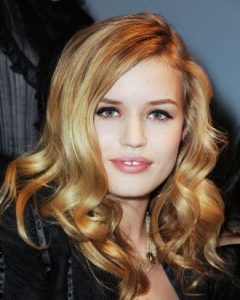 Georgia May Jagger Facts:
*Born on January 12, 1992 in London, England, she was raised near Richmond Park and moved to New York City in autumn 2010.
*Her mother is model Jerry Hall and her father is Rolling Stones’ lead singer Mick Jagger.
*She is the niece of actress Cyndy Hall and musician Chris Jagger.
*She signed with Independent Models in 2008.
*She won the title of “Model of the Year” at British Fashion Awards in 2009.
*She debuted at Chanel’s Resort 2011 show.
*She designed a line of denim for the Hudson jeans brand.
*She is good friends with model Adwoa Aboah.
*She is obsessed with Beyonce.
*Follow her on Twitter and Instagram.