Geppi Cucciari is an Italian comedian, actress and television presenter who hosted two editions of the Canale 5 show Italia’s Got Talent. She had her breakout in 2003 with the variety show Zelig Off. She was a regular in the sitcom Belli dentro between 2005 and 2009. As a writer, she debuted with the humour fiction novel Meglio donna che male accompagnata. Born Maria Giuseppina Cucciari on August 18, 1973 in Cagliari, Sardinia, Italy, she spent her youth years in Macomer, in the province of Nuoro. She studied Law at the University of Cagliari, and eventually moved to Milan where she graduated at the Università Cattolica del Sacro Cuore. She was married to journalist Luca Bonaccorsi from 2012 until 2016. 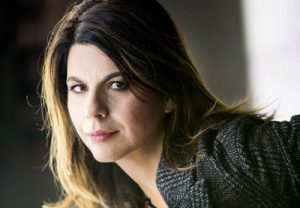 Geppi Cucciari Facts:
*She was born on August 18, 1973 in Cagliari, Sardinia, Italy.
*She attended University of Cagliari to study Law.
*She joined the theater workshop “Scaldasole” in 2000, and later entered the artistic laboratory Zelig.
*Follow her on Facebook.