Laetitia Casta is a French actress and model who became a “GUESS? Girl” in 1993. She appeared in Sports Illustrated Swimsuit Issue in 1998, 1999, 2000 and 2002. She has appeared on over 100 magazine covers including Vogue, Cosmopolitan, Rolling Stone, Elle and Glamour. She has also worked with such designers as Yves Saint Laurent, Tommy Hilfiger, J. Crew, Louis Vuitton, Givenchy, Jean-Paul Gaultier, Chanel, Ralph Lauren, Roberto Cavalli, Lolita Lempicka, and Vivienne Westwood. As an actress, she has appeared in the films Gainsbourg: A Heroic Life, Face and The Blue Bicycle. Born Laetitia Marie Laure Casta on May 11, 1978 in Pont-Audemer, Eure, France to parents Line Blin and Dominique Casta, she grew up in Normandy and Corsica. She has an older brother and a younger sister. Casta was scouted by a photographer Frederic Cresseaux at age 15 while lying on the beach with her family. She made her feature film debut as Falbala in the 1999 film Asterix and Obelix vs. Caesar. She has three children: a daughter Sahteene Sednaoui with her ex-boyfriend Stephane Sednaoui, a son Orlando Accorsi and a daughter Athena Accorsi with her now ex-fiancé Stefano Accorsi. 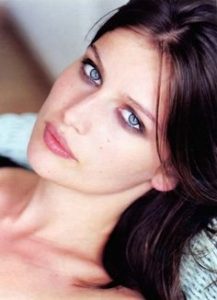 Laetitia Casta Facts:
*She was born on May 11, 1978 in Pont-Audemer, Eure, France.
*She was discovered at age 15 by a photographer Frederic Cresseaux.
*She was one of Victoria’s Secret’s Angels from 1998 to 2000.
*She appeared in Pirelli Calendar in 1999 and 2000.
*She has been the L’Oréal Paris brand ambassador since 1998.
*She has a brown belt in judo.
*Her hobbies include rollerblading, dancing, painting, writing, cooking, and racing.
*Visit her official website: www.laetitia-casta.fr
*Follow her on Facebook and Instagram.