American rapper, singer, and songwriter whose seventh studio album, N/O/I/S/E (2018), was highly anticipated in the underground music scene due to its heavy influence from industrial and nu metal groups. He has also been a member of groups such as Nemesis, Seven Serpents and Schemaposse. Born Eric Whitney on April 15, 1991 in Lake Worth, Florida, he grew up in West Palm Beach, Florida. Ghostemane started his career as a musician playing guitar in hardcore punk bands, drums in doom metal bands, and has stated that his biggest influence is black metal band Bathory. 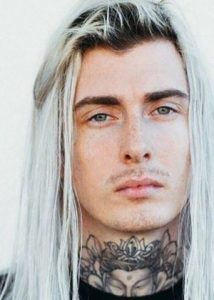 Ghostemane Facts:
*He was born on April 15, 1991 in Lake Worth, Florida, USA.
*His real name is Eric Whitney.
*His father died when Whitney was seventeen.
*He played football while he was in high school.
*He entered the music industry at the age of 14 by performing guitar covers of popular artists.
*He is influenced by Southern rap groups such as Outkast and Three 6 Mafia.
*Visit his official website: www.ghostemane.com
*Follow him on Twitter, SoundCloud, YouTube, Facebook and Instagram.