Gianluca Mager is an Italian professional tennis player who achieved a career-high singles ranking of World No. 77 on 24 February 2020, and a doubles ranking of world No. 310 on 10 June 2019. Turning professional in 2013, Mager made his ATP main draw debut at the 2017 Internazionali BNL d’Italia after earning a wildcard in the pre-qualifying wildcard tournament. He got his first singles ATP main-draw win in the first round in Stockholm in October 2019 against Spaniard Pablo Andújar. 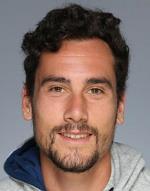