Gillian Anderson is an American-British actress of film, television and theatre. She is best known for playing the role of FBI Special Agent Dana Scully in the hit television series The X-Files (1993-2002). Gillian is the recipient of several accolades, including a Primetime Emmy Award, a Golden Globe Award and two Screen Actors Guild Awards. Her notable film appearances include The Mighty Celt, The House of Mirth, The Last King of Scotland, Viceroy’s House, Shadow Dancer and two X-Files films: The X-Files: Fight the Future and The X-Files: I Want to Believe. Her other well-known television credits include crime drama television series The Fall, Bleak House, Crisis, Any Human Heart, Great Expectations, Hannibal, and American Gods. Born Gillian Leigh Anderson on August 9, 1968 in Chicago, Illinois, to Rosemary and Edward Anderson, she belongs to English, German, and Irish descent. Following her high school graduation, she went to the Goodman Theater School of Drama at DePaul University in Chicago, where she earned a Bachelor of Fine Arts in 1990. She began her acting career by joining an amateur actor group while in high school. She married Clyde Klotz in 1994, and the couple had a daughter named Piper Maru Klotz in 1994 before getting divorced in 1997. She was then married to Alex D’Andrea from 2004 to 2007. She has two sons, Oscar and Felix with her former boyfriend, businessman Mark Griffiths. In 2016, she began dating screenwriter and dramatist Peter Morgan. 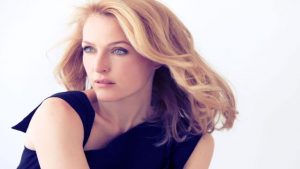 Gillian Anderson Facts:
*She was born on August 9, 1968 in Chicago, Illinois.
*Her brother Aaron died in 2011 of a brain tumor, at the age of 30.
*She worked at a pub in Chicago called Goose Island Brewpub to make some money while she was still a student.
*People Magazine named her one of the top 50 Most Beautiful People in the World in 1997.
*In March 2008, she ranked #23 on Wizard magazine’s Sexiest Women of TV list.
*In December 2008, she ranked #21 in FHM magazine’s All-Time 100 Sexiest Hall of Fame.
*She was married to Clyde Klotz from 1994 to 1997 and Alex D’Andrea from 2004 to 2007.
*She dated Mark Griffiths from 2006 to 2012.
*Visit her official website: www.gilliananderson.ws
*Follow her on Twitter, Facebook and Instagram.