Mohammad bin Salman is the Crown Prince of Saudi Arabia. He also holds several other positions such as First Deputy Prime Minister, President of the Council for Economic and Development Affairs, and Minister of Defense. He was previously Deputy Crown Prince of Saudi Arabia and Second Deputy Prime Minister, from 29 April, 2015 to 21 June, 2017. Born Mohammad bin Salman bin Abdulaziz Al Saud on August 31, 1985 in Jeddah, Saudi Arabia, he is the son of Salman, King of Saudi Arabia, and his third spouse, Fahda bint Falah bin Sultan bin Hathleen al-Ajmi. He received his primary education in Riyadh, where he was ranked among the kingdom’s top ten students. He earned a bachelor’s degree in law from King Saud University, where he graduated second in his class. He was appointed Crown Prince on 21 June 2017, following his father’s decision to depose Muhammad bin Nayef from all positions, making him heir apparent to the throne. In 2008, Mohammad married Princess Sarah bint Mashhoor bin Abdulaziz Al Saud, with whom he has four children. 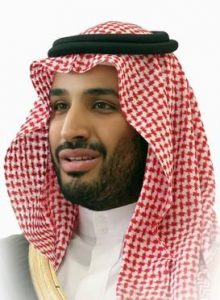 Mohammed bin Salman Facts:
*He was born on August 31, 1985 in Jeddah, Saudi Arabia.
*His mother is from the Ajman tribe, whose leader is the princess’ grandfather, Rakan bin Hathleen.
*He was enrolled in various training programmes throughout his time as a university student.
*In 2013, Mohammed was awarded the “Personality of the Year” award by Forbes Middle East for his role as chairman of the MiSK Foundation in recognition of his support for Saudi youth and their development.
*In 2015, Mohammed became the youngest Defence Minister and was appointed as Deputy Crown Price.
*In June 2017, Mohammed replaced Mohammed bin Nayef to become Crown Price.
*As of 2018, Mohammad’s net worth is estimated at US$3.0 billion.