Gina Holden is a Canadian actress. She is best known for television roles such as Coreen Fennel in Blood Ties, Dale Arden in Flash Gordon, and Shea Allen in Harper’s Island, as well as film roles such as Carrie Dreyer in Final Destination 3 and Carrie Adams in Aliens vs. Predator: Requiem. She has also appeared as a guest-star in several television shows such as The CW series Life Unexpected. Born on March 17, 1975 in Smithers, Canada, she was signed to a modeling contract and moved to Japan at the age of 15. She studied the Japanese culture and quickly made it her second home. Holden has a son named Max Holden Eiswerth with her boyfriend James Eiswerth. 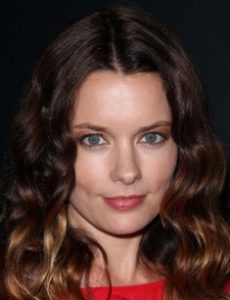 Gina Holden Facts:
*She was born on March 17, 1975 in Smithers, Canada.
*She lived in Japan at one point in her life, and considers Japan her second home and has a love of the culture.
*She made her debut in 2002 in a TV film called Roughing It.
*Her favorite songs are “Won’t Back Down” by Tom Petty & The Heartbreakers and “Fire and Rain” by James Taylor.
*Her favorite movies are Running on Empty, Dog Fight and Good Will Hunting, and her favorite comedies are Planes, Trains and Automobiles and Old School.
*She and her boyfriend James Eiswerth had a son, Max Holden Eiswerth in August 2017.
*Visit her official website: www.ginaholden.net
*Follow her on Twitter and Instagram.