Ginta Lapiņa is a Latvian model, best known by the public for her campaigns with Rodarte, Prada, and Anna Sui, among others. Lapiņa has been photographed in editorials for fashion magazines such as American, German, Russian, Japanese, Espana, Latino America, Italian Vogue magazines, Marie Claire, Numéro, Harper’s Bazaar, Dazed & Confused, Love Magazine, W Magazine, and Flair, and has been featured on the cover of Velvet Magazine, Elle France and W magazine Korea. Lapina was born on June 30, 1989 in Riga, Latvia. Her modeling career began in 2005 when she was discovered in Riga by Nils Raumanis, a renowned casting agent. She has been married to businessman Adam Hock since 16 June, 2012. Currently, she resides in New York City. 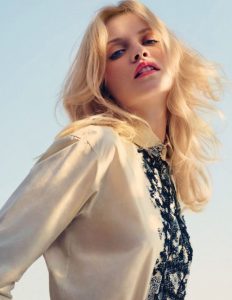 Ginta Lapina Facts:
*She began modeling in 2005 when she was discovered in Riga by Nils Raumanis, a renowned casting agent.
*Her runway debut was at the Spring 2008 New York Fashion Week.
*On October 15, 2007, she was chosen as the model of the week by models.com.
*If she were not a model, she would have been an interior designer.
*She does not like to dye her hair. She feels blonde is the best color.
*She is scared of snakes and public bathrooms.
*Her father died when she was 7. So, she was mainly raised by her mother.
*Follow Ginta Lapina on Twitter and Instagram.