Gloria Estefan is a Cuban-born American singer, songwriter, actress and entrepreneur who was the lead vocalist of the band “The Miami Sound Machine.” Gloria is in the top 100 best selling music artists, and has sold more than 100 million albums worldwide. Her best known hits include “Don’t Wanna Lose You,” “Rhythm Is Gonna Get You,” “Words Get in the Way,” “Oye mi Canto,” “Conga,” “Here We Are,” “Cuts Both Ways,” and “Anything for You.” She has won multiple Grammy Awards, including one for Best Tropical Latin Album in 1993 for Mi Tierra. Born Gloria María Milagrosa Fajardo García on September 1, 1957 in Havana, Cuba, to Gloria and Jose Fajardo, her family moved to Miami, Florida, after the Cuban Revolution. She was raised as a Catholic and studied at the St. Michael-Archangel School and later attended Our Lady of Lourdes Academy in Miami. She has been married to Emilio Estefan Jr. since September 2, 1978. They have two children, Nayib Estefan and Emily Marie Consuelo. 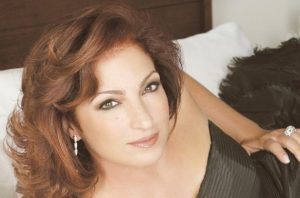 Gloria Estefan Facts:
*She was named after her mother, Gloria Fajardo .
*She is known as the “Queen Of Latin Pop”.
*She sings in both English and Spanish.
*She met her future husband, keyboardist Emilio Estefan in 1975.
*She was a member of Miami Sound Machine in the 1980s.
*She was ranked #81 on VH1’s 100 Greatest Women of Rock N Roll.
*She used to work as a translator for the U. S. Customs Service at Miami airport while in college.
*Follow her on Twitter, YouTube, Facebook and Instagram.