Gloria Steinem is a journalist, lecturer, political activist, and feminist organizer who has been an outspoken champion of women’s rights since the late 1960s. She is the founder and publisher of Ms. magazine. Gloria was born on March 25, 1934 as Gloria Marie Steinem in Toledo, Ohio, USA to Leo Steinem and Ruth Nuneviller. She has an older sister named Susan Steinem. She was married to English activist David Bale from 2000 to 2003. 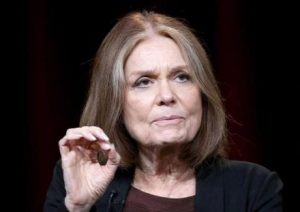 Gloria Steinem Facts:
*She began working as a writer and journalist in New York City in 1960.
*She was awarded the Presidential Medal of Freedom in 2013.
*One of People magazine’s 50 Most Beautiful People in the World (1990).
*Follow her on Twitter, Facebook and Instagram.

“A woman without a man is like a fish without a bicycle.”– Gloria Steinem