Grace Lee Whitney was an American actress and singer best known by the public for her role as Janice Rand in early episodes of the original Star Trek. At age 14, she began her career as a “girl singer” on Detroit’s WJR radio. Born Mary Ann Chase, on April 1, 1930, in Ann Arbor, Michigan, she was adopted by the Whitney family who named her Grace Elaine Whitney. 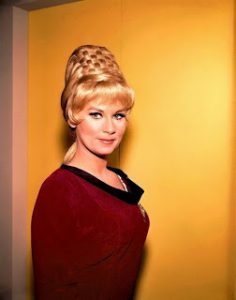 Grace Lee Whitney Facts:
*She was adopted by the Whitney family.
*She was a professional singer before becoming an actress.
*She died of natural causes at her home in Coarsegold on May 1, 2015. She was 85.