Grant Gustin is an American actor and singer. He is best known for his portrayal of Barry Allen / The Flash on the CW series The Flash as part of the Arrowverse television franchise, and for his role as Sebastian Smythe on the Fox series Glee. From 2010 to 2011, Gustin played the role of Baby John in the Broadway Revival Tour of West Side Story. 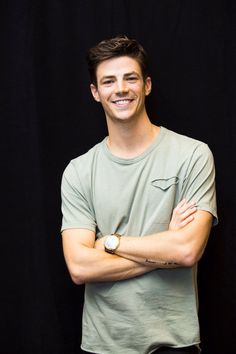 Born Thomas Grant Gustin on January 14, 1990 in Norfolk, Virginia, to parents Tina Haney, a pediatric nurse, and Thomas Gustin, a college professor, he has an older brother named Tyler and a younger sister named Gracie. Gustin attended the Governor’s School for the Arts program in Norfolk for Musical Theatre, and attended the BFA Music Theatre Program at Elon University for two years before taking a role in West Side Story. In April 2017, Gustin got engaged to Andrea “LA” Thoma and they wed in December 2018.

Grant Gustin Facts:
*He was born on January 14, 1990 in Norfolk, Virginia, USA.
*He has been open about being “gay-bashed” in high school, despite being heterosexual.
*He played Sebastian Smythe on the Fox series Glee.
*He has been a friend of actor Chris Wood since college.
*He was in a relationship with Hannah Douglass in the mid 2010s.
*He and his wife Andrea have three dogs named Nora, Rookie, and Jett.
*Follow him on Twitter, Facebook and Instagram.