Gregg Sulkin is a British actor who made his acting debut in the 2002 Doctor Zhivago mini-series. He starred as Bernie Rubens in the 2006 British release Sixty Six, and appeared in the Disney Channel comedy series As the Bell Rings and Wizards of Waverly Place. In 2010, Sulkin starred as William Wagner in the Disney Channel television film Avalon High, and had a recurring role in the American teen drama series Pretty Little Liars in 2012. Other notable acting roles include Liam Booker on MTV’s show Faking It, Sam Fuller in the horror-thriller film Don’t Hang Up, and Chase Stein in the TV show Runaways. Born on May 29, 1992 in London, England, to parents Janice and Graham Sulkin, he has an older brother named Grant. He belongs to both Ashkenazi Jewish (including Dutch Jewish) and Sephardi Jewish descent. He was educated at Highgate School in North London. Sulkin started dating Michelle Randolph in 2018. He was previously in a relationship with Bella Thorne and dancer Lexy Panterra. 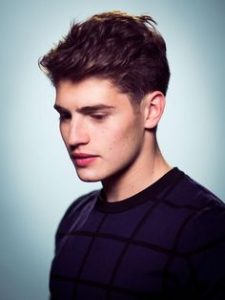 Gregg Sulkin Facts:
*He was born on May 29, 1992 in London, England, UK.
*He is Jewish and had his Bar Mitzvah ceremony by the Western Wall in Israel.
*He made his acting debut in the 2002 British television miniseries Doctor Zhivago.
*He made his film debut in Sixty Six (2006).
*He became a US citizen on May 23, 2018. He retains his British citizenship.
*Follow him on Twitter, Facebook and Instagram.