Hailey Baldwin is an American model and television personality who has appeared in editorials for Glamour Magazine and Italian Vogue. In June 2016, Baldwin walked for Moschino with high-profile supermodels as Miranda Kerr, Alessandra Ambrosio, Chanel Iman and Jourdan Dunn. In May 2, 2017, Baldwin became the co-host of the TBS show Drop the Mic with rapper Method Man. She became the face of Levi Jeans in 2019. She’s represented by the agencies IMG Models and FORD Models NY. Born Hailey Rhode Baldwin on November 22, 1996 in Tucson, Arizona, she is the daughter of Stephen Baldwin and Kennya Baldwin and younger sister to Alaia Baldwin. Her father is of English, Irish, Scottish, French and German descent and her mother is a Brazilian of Portuguese and Italian descent. Hailey’s maternal grandfather is the Brazilian musician Eumir Deodato and is the niece of Alec Baldwin, William Baldwin, and Daniel Baldwin. Her first modeling representation was by Ford Models New York. She married Canadian singer-songwriter Justin Bieber in 2018. 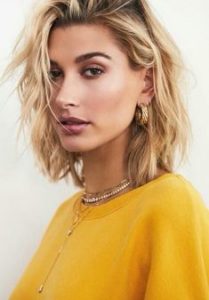 Hailey Baldwin Education:
She was homeschooled.

Hailey Baldwin Facts:
*She was born on November 22, 1996 in Tucson, Arizona, USA.
*She is the daughter of actor Stephen Baldwin, and her uncle is actor Alec Baldwin.
*She was named after Halley’s Comet.
*She was raised as an Evangelical Christian and attends Hillsong Church, the same church Bieber attends.
*She is a trained ballerina.
*She signed a contract with IMG Models high-profile New York modeling agency in March 2016.
*She is good friends with Kendall and Kylie Jenner.
*On July 7, 2018, Hailey became engaged to Justin Bieber, and married in September 2018.
*Follow her on Twitter, Facebook and Instagram.