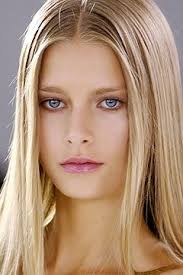 Hana Soukupova Facts:
*She was born on December 18, 1985 in Karlovy Vary, Czechoslovakia.
*She played basketball while in school.
*She started working as a model in Prague in 1998.
*She got to sign her first major modeling contract at the age of 15 becoming the face of Carolina Herrera’s Chic perfume.
*She won the first edition of Topmodel of the New Millennium contest in May 2001.
*She debuted with Haute Couture – Spring / Summer 2003 fashion show walking the ramp for Elie Saab, and Emanuel Ungaro.
*She was one of the models selected to appear on the cover of American Vogue in September 2004.
*She enjoys Vintage shopping, pottery, and playing basketball.
*She is friends with fellow models Eugenia Volodina, Jessica Miller, Julia Stegner, Behati Prinsloo, Doutzen Kroes, Elise Crombez, Lindsay Ellingson, and Natasha Poly.
*Her style icons are Kate Moss, Twiggy, and designer Halston.
*Follow her on Instagram.