Haylie Duff is an American actress and singer-songwriter, best known for her roles in the television series 7th Heaven as Sandy Jameson, Lizzie McGuire as Amy Sanders, Napoleon Dynamite as Summer Wheatley, and TV movies Love Takes Wing and Love Finds a Home as Annie Nelson. She is the older sister of actress and singer-songwriter Hilary Duff. Along with her sister Hilary, she released the 2004 single “Our Lips Are Sealed,” and they also co-starred in the 2006 teen comedy Material Girls. Born Haylie Katherine Duff on February 19, 1985 in Houston, Texas, USA, to Susan Colleen and Robert Duff, she began ballet at an early age. She belongs to German descent. She made her film debut in The 1998 film Addams Family Reunion. She has been in a relationship with Matt Rosenberg since 2012, they got engaged in April 2014. The couple welcomed a daughter, Ryan Ava Erhard Rosenberg, in May 2015. She was previously in a long-term relationship with actor Nick Zano from 2008 to 2011. 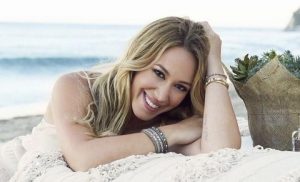 Haylie Duff Facts:
*She is of German descent.
*She is the older sister of Hilary Duff.
*She and her sister Hilary Duff were ranked #2 in E!’s “Favorite Famous Sisters.”
*She graced the cover of Maxim magazine in January 2006.
*She was ranked #89 on the Maxim magazine Hot 100 of 2007 list.
*Follow her on Twitter and Instagram.