Heidi Montag is an American television personality who rose to prominence after being cast in the MTV reality television series The Hills. Heidi and Spencer participated in the second season of the American version of I’m a Celebrity…Get Me Out of Here!. They also competed as a single entity on the eleventh series of the British version of Celebrity Big Brother. Montag released her debut studio album Superficial in January 2010. Born Heidi Blair Montag on September 15, 1986 in Crested Butte, Colorado, to parents Darlene and Bill Montag, she is the younger sister of Holly Montag. She graduated from high school and attended the Academy of Art University before transferring to the Fashion Institute of Design and Merchandising. She married her The Hills co-star Spencer Pratt in 2009. They have a son together. 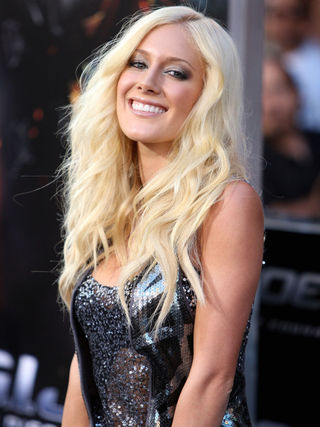 Heidi Montag Facts:
*She was born on September 15, 1986 in Crested Butte, Colorado, USA.
*She is of German and Irish descent.
*She is the younger sister of Holly Montag, and sister-in-law of Stephanie Pratt and Richard Wilson.
*She starred on the MTV reality series The Hills from 2006 to 2010.
*She released her first two extended plays Wherever I Am and Here She Is… in 2009.
*She was ranked #36 on the Maxim magazine Hot 100 of 2008 list.
*She launched her clothing line called “Heidiwood” in 2008.
*She enjoys martial arts and grappling, and trains Brazilian Jiu-Jitsu with black belt teacher Kevin Casey.
*Visit her official website: www.officialheidimontag.com
*Follow her on Twitter, Facebook and Instagram.