Henrikh Mkhitaryan is an Armenian professional football player who plays for Serie A club Roma and the Armenian national team. He plays as an attacking midfielder, but can also play as a wide midfielder. Mkhitaryan also previously played for the Pyunik, Metalurh Donetsk, Shakhtar Donetsk, Borussia Dortmund, Manchester United, and Arsenal. Born on January 21, 1989 in Yerevan, Armenia, to parents Hamlet Mkhitaryan and Marina Taschyan, his father was a prominent striker for FC Ararat Yerevan during the 1980s, who died of a brain tumor at age 33 when Henrikh was seven years old. In June 2019, Mkhitaryan married Betty Vardanyan. They have a son together. 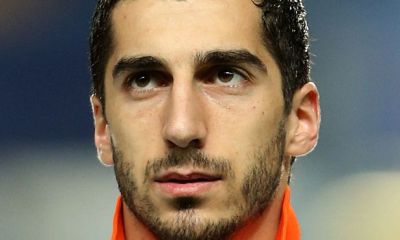 Henrikh Mkhitaryan Facts:
*He was born on January 21, 1989 in Yerevan, Armenia.
*His maternal grandmother was of Russian ethnicity.
*He made his professional debut in 2006 for Pyunik Yerevan and made his international debut for Armenia in 2007.
*He was named captain of Armenia’s national team in 2013.
*He won four Armenian Premier League titles with Pyunik, and joined Metalurh Donetsk in 2009.
*He moved to Shakhtar Donetsk in 2010 for €6.1 million, where Mkhitaryan set the league goalscoring record in the 2012–13 season, and was named the league’s Footballer of the Year.
*In 2013, he signed for Bundesliga club Borussia Dortmund for a club-record fee of €27.5 million, making him the most expensive Armenian player of all time.
*He joined Manchester United for £30 million (€34.3 million), becoming the first Armenian to play in the Premier League.
*He joined Arsenal in 2018.
*He is a polyglot who speaks eight languages: Armenian, English, Portuguese, Russian, Ukrainian, French, Italian and German.
*Visit his official website: www.mkhitaryan.am
*Follow him on Twitter, Facebook and Instagram.