Hilarie Burton is an American actress and producer best known for her role as Peyton Sawyer on One Tree Hill. She is a former host of MTV’s Total Request Live. Born and raised in Virginia, Hilarie is the oldest of four children in a tight-knit family. Early on, she developed a passion for acting, so when she grew up, she went to New York to pursue her dreams. She got her start as a VJ on MTV, which lead to a guest role on an episode of “Dawson’s Creek.” 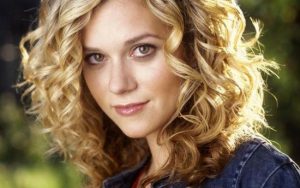 Hilarie Burton Facts:
*Her father, Bill, is an antique collector and her mother, Lisa, is a real-estate agent.
*She was not allowed to watch MTV growing up.
*She has a cat named Poe.
*She was Ranked #77 on the Maxim magazine Hot 100 of 2007 list.
*She Bought a gold 1986 Mercedes in March 2004.
*She is very close friends with Sophia Bush, Danneel Ackles, and Elisabeth Harnois.
*Follow her on Facebook.