American model who is notable for her work with the brand Estée Lauder and her 2009, 2010, and 2011 appearances in the Sports Illustrated Swimsuit Issue. She has appeared in advertisements for Balenciaga, Valentino, Belstaff, Dolce & Gabbana, Gap, DSquared², Shiatzy Chen, Givenchy, Donna Karan, Gucci, Blumarine, and Ralph Lauren, and in Victoria’s Secret catalogs, and has appeared on the covers of major international magazines including American Vogue, Vogue Italia, Vogue Paris, British Harper’s Bazaar, Time, Numéro, and W. Born Hilary Hollis Rhoda on April 6, 1987 in Chevy Chase, Maryland, to parents Marianne and Jeffrey Alle Rhoda, she is of German, English, and Irish descent. She attended the Academy of the Holy Cross. On October 10, 2015, she married former National Hockey League player Sean Avery. They have a son together. 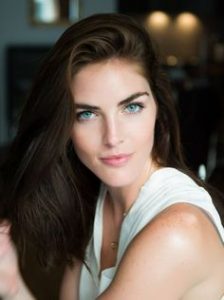 Hilary Rhoda Facts:
*She was born on April 6, 1987 in Chevy Chase, Maryland, USA.
*She has a brother named Spencer.
*She was discovered at a ProScout event in Washington, D.C.
*She was featured in the 2011 Max Mara AW campaign.
*She appeared on the cover of Sports Illustrated in 2009, 2010 and 2011.
*She appeared in Victoria’s Secret’s Fashion Show 2012.
*She ranked #6 in Forbes’ 2013 ranking of the world’s highest-paid models.
*Follow her on Twitter, Facebook and Instagram.