Hilary Swank is an American actress who won Oscars for her roles in ‘Million Dollar Baby’ and ‘Boys Don’t Cry.’ She played Jeanne St. Rémy de Valois in the 2001 film The Affair of the Necklace. Her other well-known films include Insomnia, P.S. I Love You, Freedom Writers, Amelia, Black Dahlia, Conviction, and The Homesman. Born Hilary Ann Swank on July 30, 1974 in Lincoln, Nebraska, USA, to Judy and Stephen Michael Swank, she was raised in Bellingham, Washington, where she went to Sehome High School. She has an older brother named Daniel. She dropped out of high school to pursue acting. She made her film debut in 1992 as Kimberly Hannah in Buffy the Vampire Slayer. She was married to Chad Lowe from 1997 to 2007. On March 21, 2016, Swank became engaged to her boyfriend of 8 months Rubén Torres, but they broke up in June 2016. 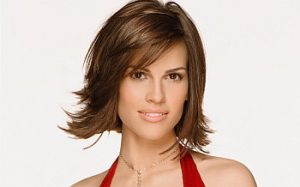 Hilary Swank Facts:
*She was born on July 30, 1974 in Lincoln, Nebraska.
*She moved with her family to Bellingham, Washington at the age of 6.
*She has been acting professionally since she was age 16.
*She was formerly a vegetarian.
*She was active in gymnastics and swimming while in school.
*She competed in the Junior Olympics and the Washington state swimming championships.
*People Magazine named her one of the top 50 Most Beautiful People in the World in 2000, 2004 and 2005.
*She is best friends with actress Mariska Hargitay.
*She has a parrot and a cat, Tallinn.
*Follow her on Twitter and Instagram.