American pop rock singer-songwriter who rose to fame in 2009 after finishing as runner-up on the eighth season of American Idol. His debut album, For Your Entertainment (2009), debuted at #3 on the U.S. Billboard 200. His second studio album, Trespassing (2012), premiered at number one on the U.S. Billboard 200, making him the first openly gay artist to top the album charts. Lambert’s notable hit songs include “Whataya Want from Me”, “No Boundaries”, and “If I Had U”. He has also collaborated with rock band Queen as lead vocalist for Queen + Adam Lambert since 2011. Also an actor, Lambert appeared in five episodes of the fifth season of Glee, portraying the character Elliot “Starchild” Gilbert. Born Adam Mitchel Lambert on January 29, 1982 in Indianapolis, Indiana, to parents Leila and Eber Lambert, he has a younger brother named Neil. At age 9, Lambert started performing with Metropolitan Educational Theatre network (now MET2). In 2018, Lambert began dating Javi Costa Polo. He was previously in a relationship with Finnish reality TV personality Sauli Koskinen from 2010 to 2013. 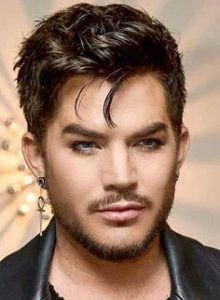 Adam Lambert Facts:
*He was born on January 29, 1982 in Indianapolis, Indiana, USA.
*He and his family moved to San Diego, California, shortly after his birth.
*He was runner-up on the eighth season of American Idol.
*He received the Young Hollywood Award for Artist of the Year in 2009.
*He was inspired by the music performers Michael Jackson, Freddie Mercury, David Bowie, Madonna and Lady Gaga.
*He is a huge fan of Christina Aguilera.
*He is close friends with Anna Kendrick.
*He is openly gay.
*Visit his official website: www.adamofficial.com
*Follow him on Twitter, SoundCloud, YouTube, Facebook and Instagram.